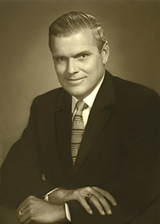 Richard, or "Dick" as he was known, was born in St. Petersburg, Florida, which is where he lived most of his civilian life. He received his Bachelor and Juris Doctor degrees from the University of Florida. After a brief stint as a Lieutenant in the United States Navy, Dick practiced law in St. Petersburg before ascending to the bench of the Sixth Judicial Circuit in and for Pinellas County, Florida. Dick sat on the bench for almost twenty years, serving it as Chief Judge for over ten years. Judge Leavengood was then appointed to serve as an Interim Justice to the Supreme Court of the State of Florida. Unsuccessful in his re-election efforts against Justice Boyd of South Florida, Dick retired from the judiciary and began to practice law. In the beginning, he focused almost exclusively on Real Estate and Eminent Domain. Dick was eventually joined in practice by his son, Richard, forming Leavengood & Leavengood, a predecessor of the LeavenLaw firm that exists today. Dick was the father of seven children and a mentor to numerous attorneys and judges in West Central Florida, many of whom are still practicing to this day.